There is a fair weight to this torch.  It is 17 CMS long and 2 CMS thick at the lamp end.  Took me a while to work out where the batteries should go.  You unscrew a cap where the lamp is rather than the other end as I was doing at first.  The torch takes very small LR44 batteries - 4 of them!  Easy enough to slot them in.  I shall be supplying the torch with 8 batteries in all, 4 installed and 4 as spare.  They are very cheap to acquire from eBay.  I bought them in bulk, so I can afford 4 batteries with each torch.  I prefer to sell torches in this manner, in that I try them out beforehand. The torch can be extended to a max of 53 CMS, which is quite a length.  The action is pretty stiff, but then again, these are new torches.  The flexible part of the stem is right near the head of the torch, where the led lamp resides.  The magnet sits flush with the end of the torch and can easily pick up a set of keys and the like.  Bolts and screws wouldn't be any bother, probably spanners could be picked up too I should think, within reason.  The number of times I could have done with a tool of this sort when working on my own car a number of years ago.  It would have come in dead handy.

The torch reminds me of a scene from The War of the Worlds with Tom Cruise, where an alien telescopic eye was scouting the house he was hiding in.  The light itself is strong enough to locate objects, dropped or otherwise.  I don't know how long the batteries are likely to last but then again how long would you leave the torch on for?  Not long I should think.  The button to switch the lamp on and off is located at the lamp end.  It is easy enough to get at and activate.  All in all a pretty robust torch that should give good service I think. It isn't indestructible though but it does seem sturdy enough for the type of use it will be put to.

Welcome to MKJ Enterprises. Most of the products listed here can be found on eBay. As we sell these products we are able to test them thoroughly before writing a review. We only intend to sell products we ourselves think are of good quality and value for money. 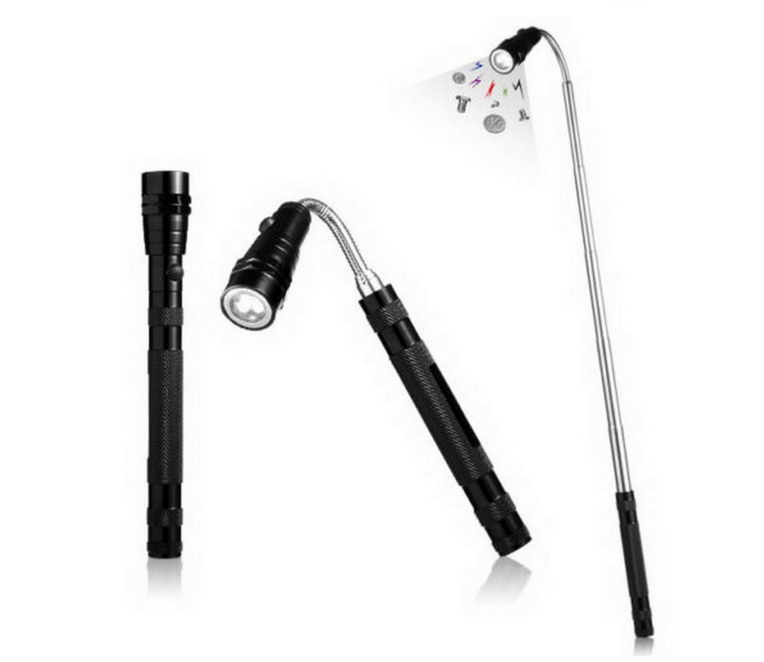